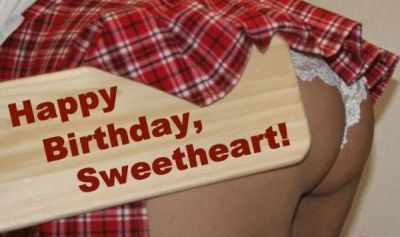 Dan (SpankingBlog.com) had a birthday a few weeks ago and I made him this card. I also got his birthday spanking. Yes, I got the spanking even though it was his birthday. I’m the only one who gets spanked around here so that’s the way it works. That’s fine by me, but it does mean I get whatever kind of spanking he wants to give me since it’s his birthday. He gets to pick the implements and then give it to me however he likes.

Now I won’t say how many spanks he gave me, but it was plenty. Especially since he used that big studded paddle for the counted birthday spanks. I can’t believe I was silly enough to let him have that paddle. That paddle was serious enough before and those studs make it extra ouchie. Yeah, I know…what was I thinking when I put those studs in that paddle??? Bad, greedy bottom!

Dan started the spanking with a warm up that was intense enough. He started with his favorite short whip which was nice and stingy and lulled me into a false sense of security. I was just starting to really enjoy the sting when he changed toys and started spanking me with the Vermont bath brush. I almost climbed right over the arm of the chair I was bent over. Darn that thing burns and burns!

About the time I thought that part of the spanking was never going to end, Dan put the bath brush down and picked up the heavy hair brush. Have I mentioned Dan likes to give me a serious warmup? I was good and warm by the time he made me ask for the birthday spanking.

Then I had to keep count of the strokes which almost made it worse. I hate counting! But it’s better than the alternative which is letting him count. As it was, he tried to mix me up on the number a couple of times. He almost convinced me I was about five strokes off but I recovered and corrected the count. Dan’s tricky like that.

Well, Dan put that paddle to good use and when it was over, I had one very sore bottom. There was extra soreness compliments of my own handiwork.

That was just the beginning of our birthday fun, too. There’s much more to tell but I need to get moving. I got a good spanking earlier and it’s not easy to write these long blog posts when I’m sitting on a tender bottom. I need better cushions!