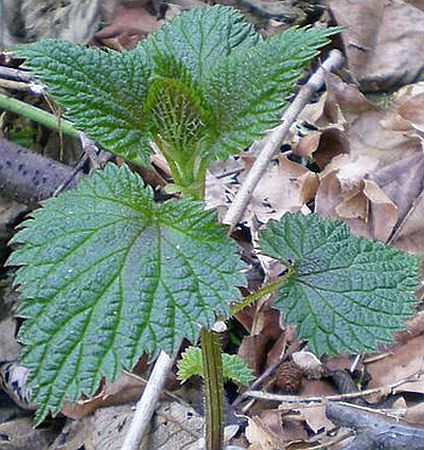 Remember my nettle experience? I’m not sure if I mentioned it or not, but Dan’s crop of nettles died a slimy death as he recounted here on his blog. That was all about a year ago and we haven’t had a chance since then to revisit the subject, until recently.

It seems that I had a bout of temporary insanity recently. That often happens right after a really good spanking; the afterglow from a sore bottom makes me extra crazy kinky. Well, during that bout of insanity, I ordered some stinging nettle plant starters. I had no idea what I was doing in so many ways but I did it anyway. It was crazy!

Then, just to make sure I didn’t lose my nerve, I told Dan ahead of time that the plants were coming. I told him I wanted to let him know so he’d be ready for them when they arrived. I kept telling myself, “It’s going to be fun! Woo-hoot!” I really had to keep telling myself that, too.

Some sensible part of my brain kept trying to nudge me with some sort of logical argument against putting that sort of thing in Dan’s hands and what the outcome was sure to be, but as usual, other parts of me drowned that argument out by saying, “Yeah, that’s the whole point, stupid! Now go away so we can have some fun over here.” That was followed by a loud raspberry at which point the logical part of my brain gave up, mumbled something about not to come crying to it when things went badly, and the butterflies in my stomach started dancing again. Spank lust wins again!

Things then proceeded as planned. Dan bought the plant stuff, the starters arrived, they were planted as directed, and now we’re waiting. There’s one set in a planter right under the window were I have my computer set up. I can watch it grow right from my desk. I do sneak glances at it once in a while, which makes me wonder about the positioning of the planter, but so far, not much is happening. I know, these things take time. But I’m not the most patient gal.

I keep waiting for this thing to sprout and it gives me lots of time to wonder, fret, and anticipate. On the one hand I’m thinking, “Dang it, grow!” On the other hand, I remind myself that they are stinging nettles after all, and I think, “Now what have I done?” Then about a second later, as I ponder the “stinging” description and I remember how they felt…ohhhh yeah… I’m back to “Dang it, grow, you little beasties!”

It can be complicated being this kinky. *wink*