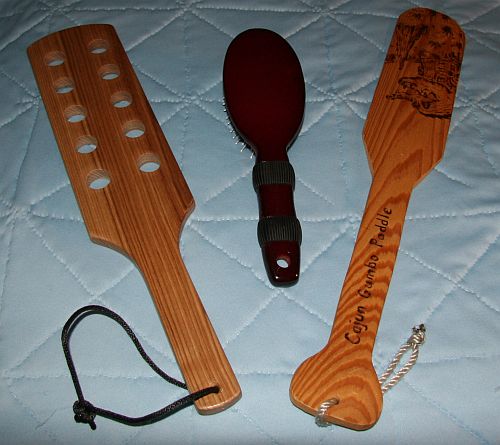 I love a good spanking that leaves my bottom throbbing for hours and sore for a couple of days, no surprise there. But sometimes the spanking it takes to achieve those much desired results can take time, effort, and the right implements. Luckily we had all of those the other night and Dan gave me one very, very good spanking.

It was the kind of spanking that would make a sensible woman sleep on her stomach. I’m not that woman though. I loved the way the soreness in my bottom was intensified when I rolled over onto my back, even on our comfy pillow top mattress. That’s when I knew it was a good spanking that would last and be enjoyed for a couple of days at least. Yum.

The spanking it took to get my bottom that sore was an all wood spanking that involved those three implements in the above picture. The alligator, the hairbrush, and the dreaded holey paddle. We also call that holey paddle the Girls Boarding School paddle because it’s modeled after one they use and Dan admired.

Dan started with the alligator paddle which was his idea of a warm up. At the time I thought it was a good idea to point out that the alligator wasn’t my idea of a warm up toy and asked that he take it easy. I was obviously wrong and Dan proceeded to show me just how wrong I was by swinging the paddle just a little harder and faster so I’d know he really was taking it easy. Owie. It’s bad enough to be wrong, it’s worse to be wrong in the middle of a spanking. I just hate that. I also hate that paddle sometimes.

Isn’t it funny how the light paddles can be the most deceiving? They seem so harmless right up until they make contact with your waiting bottom. Even then sometimes the sting they deliver doesn’t seem too bad. That is until stinging swat after stinging swat lands and the effect builds up. It’s all surface sting and it just keeps right on stinging.

I was face down on the bed desperately trying not to chew through the bedding when Dan decided it was time for a change. I was in the middle of a sigh of relief that changed to squeak instead when he informed me (quite cheerfully btw) that it was time for the hairbrush. That particular hairbrush is a favorite of his because it always gets a response from me. I don’t know what it is about that brush but a spanking with it is sure to set my bottom on fire every time. And this was no exception.

I squealed, I squawked, I kicked, I flailed, and all to no avail. See, this is the problem with a good spanking; it hurts…a lot. At the time the spanking is being delivered, my poor bottom sends me all these signals that it wants relief, but it really doesn’t. My body reacts to a spanking the way non-kinky women react to regular foreplay. Spanking is foreplay to me. The more a spanking hurts, the better my body likes it. Just to prove it, Dan will occasionally stop spanking me, slide his fingers into me, and tell me how wet I am. He likes taking those little breaks to remind me how much I’m enjoying my spanking despite all my complaining. Spankings hurt and I’m wired to enjoy that, but I still have to complain! Isn’t that part of the fun after all?

So there I was, kicking and squealing while Dan continued to spank me hard with that hairbrush and my poor bottom was burning hotter and hotter. Then only upside was that a couple of spots on my bottom were getting a little numb from all that spanking with the brush. Still, it was pretty intense and suddenly I heard myself suggesting a change without thinking. The surprise was that he listened. The not so surprising part was that he went back to the alligator paddle.

Oh boy. I went from the deep burn of the hairbrush to the surface sting of that lighter paddle. That paddle woke my bottom up and the beginnings of that numbness went away really quickly. He had a plan it seems. He spanked me with the alligator just long enough that the deep burn was replaced by an allover sting, then he went back to the hairbrush. Then back again as soon as I’d relax when the hairbrush would become numbing again. Not fair!

Well, I thought it wasn’t fair right up until Dan told me to kneel up a little because he wanted to change paddles again. I was hoping for something leather, instead he picked up that holey paddle. When that man decides I’m in need of a really good spanking, he doesn’t mess around. My bottom was already on fire and that paddle only added to the burn. After only a couple of swats I was begging for relief and I even attempted to roll away when I didn’t get any relief. That only meant Dan had to tell me to get back into place so he could start over. Start over? Why does that always mean we start over? Hmph.

After some number of swats with very little interruption for rubbing, Dan told me we were almost done. I got myself all psyched up and stuck my bottom up for the final assault with that paddle. I’d gotten to that point though. My bottom was so thoroughly spanked that even though I groaned with every stroke, the heavy burn of each stroke had become addictive almost. Dan always seems to know when to stop spanking and roll me over for the lovemaking before I get too lost though. That’s a good thing because the lovemaking is always so good after a good spanking. There’s so much to enjoy after a good spanking; the lovemaking, the sore bottom, the “all’s good with the world” feeling. It’s all good.