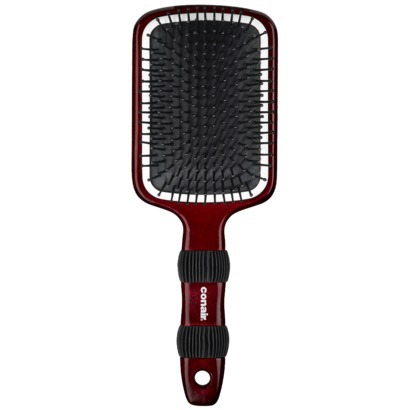 The much anticipated Friday night spanking was fun, intense, and much needed for both of us after such a long dry spell. I was feeling really frisky so for inspiration I put on my little French maid’s outfit with the ruffly panties, which was fun but didn’t stay on as long as I thought it might. I showed up, pranced around a little while he complemented the look, grabbed me for a little hairbrush action but then after finding out the hairbrush wasn’t as effective over the panties I got the wedgie treatment and the full effect of the brush. I found out that although it felt thuddy over the panties and it was full of sting on the bare. For a little while there I was fooled into thinking that brush wasn’t as bad as I’d remembered. Once it was applied to my bare bottom though, I realized it really was as mean as I’d remembered.

After the months of inactivity due to my health issues I was worried my bottom wasn’t going to be able to take as much spanking as before but it didn’t take long before I realized I’d had nothing to worry about. Sure, that hairbrush stings like crazy it’s just that after a bit it became the good kind of sting. I may not like the actual moment when the brush makes contact with my bottom, it’s the after burn that is such an intense mixture of pleasure/pain that gets me every time. The result is that I squeal, kick, squirm, beg, and otherwise appear to be miserable but in actuality I’m just reacting to the part of the hairbrushing I don’t like. All Dan has to do is “check” to find out I’m enjoying something about being spanked like that. I hate getting a hairbrush spanking…but I love the after burn.

After a quite a bit of the hairbrush and his hand, we moved to the bed. It took a bit of testing but I found out that kneeling on the bed while leaning against the lower side of my wedge pillow with another pillow under me and my arms hooked over the higher end of the wedge for support worked best. That kept me from putting too much pressure on my belly while keeping my bottom positioned for spanking. At least that part was comfortable! Dan had gathered my favorite rose paddle, a couple of leather straps, and a long shoe horn as well as bringing along the hairbrush for the next phase of my spanking.

Dan started the spanking with the rose paddle which I appreciated. The spanks were firm and thuddy for the most part but Dan mixed in a few harder swats that burned for fun. I’m beginning to think that man likes to hear me squeal.

After that easy start he began using the other implements, giving me a little with each and varying the intensity of the spanking. I have no idea how long that lasted. I’d settled into the spanking by then and I was just enjoying ride. When he’d stop to rub my bottom his hand would wander between my legs which made me moan and wiggle until he took his hand away again. After quite a bit of spanking my bottom was on fire (as were other parts of me) but I could have kept that up forever. It was so good! I’d almost forgotten how good it could be. Mmm-mm!

Once Dan told me to roll over and I realized he had the nipple clamps in his hand I knew it was time for a different kind of action. That was really good too, btw. Heh.

That was Friday night and I was happy to wake up with a sore bottom on Saturday. I was less happy as the day went on and my bottom became rather itchy. I hate having an itchy bottom! I know it’s from the healing, but it’s annoying.

Later that day one of my girlfriends had a little emotional emergency and needed support so I was gone most of the latter part of Saturday. I spent most of that time sitting in seats that weren’t exactly the most comfortable either and as the night went on my bottom just kept getting worse. The soreness was lovely, the itchy not so much. I couldn’t exactly scratch it either so I did my best to keep my mind on the conversations and ignore my bottom. It wasn’t easy but somehow I got through the night. When I got home Dan was neither sympathetic or helpful. He did laugh a lot and pinch it for fun though. No help. When I first got to bed I couldn’t get my mind off the itching but eventually I fell asleep.

Sunday was just as bad as Saturday night. I was so desperate I even considered getting out my spiky mat and sitting on it to see if that would help. When I mentioned that to Dan he told me to be careful what I wished for and seeing the look in his eyes I was quick to let him know I’d decided that wasn’t going to help after all and changed the subject. It’s one thing to think about sitting on that mat, I don’t want to be sentenced to sit on the mat. That thing hurts! It’s amazing the things I come up with. You’d think I had a greedy bottom or something. Geez! 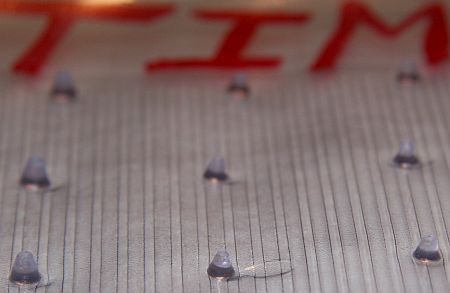 That’s one mean mat! It’s made from a vinyl carpet runner that has all these little grippers to keep it from moving when used for it’s original purpose. Turned upside down it makes any sitting surface into an experience a bottom will remember. Probably not the best cure for an itchy bottom but I was desperate! As it turned out, Dan found a cure for me later that evening. But that’s a story for another day. I’m already late for bed so I better hurry!